2019 has already been a huge year for wind energy so we thought we’d look back on some of the big developments so far and those still to come.

2019 has gone so quickly, with so many major developments taking place it feels like we’ve had a full year already and it’s only July! This week’s blog looks at the major sector developments and looks ahead to what’s to come in the sector for the rest of the year. As a GWO trainer we’re well placed to see what is really happening in the sector from an infrastructure and employment perspective and one thing is for certain that wind energy continues to grow, fast.

Wind energy generated more electricity than coal for the first time this year. April saw wind surpass coal for the first time ever and indications suggest that this will only accelerate the decline in the coal industry. As it becomes ever cheaper to generate power via renewables less profitable fossil fuels are surely on the way out. Much of this demand has been driven by states, cities and corporations commiting to clean energy despite the national backdrop.

Big wind farm news has been coming through at regular intervals. So far this year we have seen the Vinyard offshore farm, Ocean wind off the coast of Atlantic City and two major projects off the Long Island coast announced. This comes against a backdrop of numerous new onshore farms being awarded contracts. The sector is moving fast as the USA catches up with the rest of the world.

Corporates and cities leading the way

Major cities like Dallas and Chicago have made bold commitments to renewable energy. In both cases they have set targets to use 100% clean energy. Despite a national backdrop at odds with renewable energy these are just two examples of cities, states and municipalities taking action into their own hands where energy is concerned.

Corporates are also doing their bit. There is a clear drive towards clean energy as corporates look to secure their energy needs now and in the future. Well known organisations like Facebook have made a clear commitment to wind energy creating hundreds of jobs in the process with other well know organisations following such as AT&T and Google. These companies have set impressive targets and on the face of it it’s great PR but there’s more to it than that. These companies know that renewable costs are steadily reducing vs. increasingly expensive fossil fules. They also know companies who take an active role in managing their energy efficiency perform better over the long term.

It’s been a super busy year so far at STL USA. 2019 is on course to be a record year for students trained and accredited with GWO qualifications. We’ve attended some great industry events particularly AWEA’s conference in San Diego and we hope to make more friends in the industry over the next months and years.

What’s in store at STL USA

The rest of 2019 is about cementing STL USA’s place as the leading provider of GWO training solutions in the USA. We’re actively recruiting for new trainers and we hope to have secured an additional world class training facility by year end. 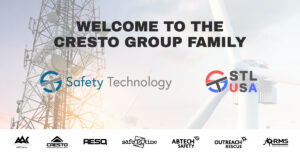